It seemed a long time since we had an informal get together at the sailing club. Things had to change. So I sent an email to club members inviting all to the club.

What a response. On the evening the club quickly filled with folk keen to mix with friends.

There was no official buffet but I had put on plates of nibbles. Lynn had made cupcakes and Jenny Pope brought a savoury platter, Thank you both.

Summer weather was showing itself and with all the windows open both indoors and out on the decking folk were happy drinking and chatting.

I had thought about providing a fun game to help the evening along, but it would have disrupted the flow so, maybe another time.

As usual photo’s were taken during the evening, see below for the happy faces…

Addendum: Evidence exists of frivolity and dancing from a number of sources. Therefore to prevent pirate copies hitting the internet, one video has been sanctioned for upload. Credit due to the Hawkins “Ghetto Blaster” and Abba and five dancing Queens… Clare 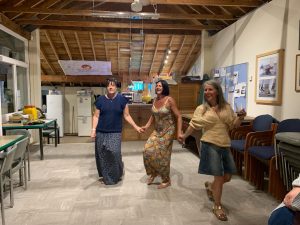